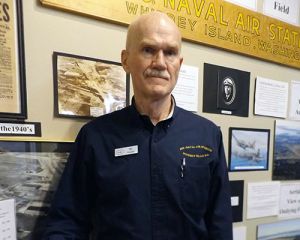 In 2018, last year’s solid progress is being carried forward. Venues presenting naval aviation history are being expanded. Education and outreach programs are being expanded and improved. Relationships with additional museums and PBY restoration projects are growing. Progress is being made on a new museum. And, finally, we are building on the last year’s fundraising successes.

We continue taking the story of Naval Aviation in the Northwest to venues throughout the area, including at least one new event at the Skagit Valley Regional Airport on July 14 featuring Pacific Flying Boats’ PBY-5A. Work will soon commence on an exhibit in a downtown Oak Harbor mini-mall. All these appearances will be enhanced by improved interpretive signage.

In February, the brainchild of one of our volunteers, Eva Corona, became reality in the form of a Museum Activity Day for school age children. This event was so successful that we are working on funding to conduct activity days on a regular basis. Additionally, consideration is being given to expanding the idea to include Squadron Family Days for the families of NAS Whidbey Island squadrons that are about to deploy. Other education and outreach efforts include a complete overhaul of our Website (you should see results on this before summer’s end) and continued enhancement of our Luncheon Speakers Program. On this note, the July 25 speaker is Henry Lowenstein, PhD, from North Carolina. His book, Rescue Man, recounts the story of an Army Air Forces pilot flying OA-10 (PBY) emergency rescue missions during WWII. His presentation has drawn interest from several potential out of state attendees. Be sure to join us at the CPO Club.

In 2013 a large collection of PBY aircraft parts was donated by the Miriam Kendall Trust. Many of these parts are not needed to restore our own PBY-5A. They have been made available to other museums and PBY restoration projects. After some initial trading activity, no trading ensued for over four years. Then, late last year, discussions began with the John Sterling family in Hawaii/Oregon and Pacific Flying Boats, Inc. Several months later, Larry Kiger, an Oak Harbor resident, initiated conversations with the Evergreen Air and Space Museum in McMinnville, OR. As this Cat Chat goes to press, the last of three separate exchanges involving over 50 parts is being completed. Beyond receiving materials and repairs in trade for our plane, these exchanges help promote restoration of other PBY aircraft thus keeping the story of this iconic plane available to a larger public audience. As Jim Siggens lays out in his Chairman’s column, real progress is being made toward making our dream of a new museum reality. All indications are that it can be done. However, we must work within processes that involve time and patience. 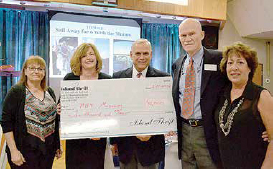 2017’s big impact lesson was that a one-two punch combining a successful Celebration of Flight Dinner/Auction fundraiser and a successful Mid-Year Fund Raising Appeal was transformational for your PBY-Naval Air Museum. The museum began, for the first time, to reach its potential for engaging a larger community in the rich naval aviation history of the Northwest. All the activities and programs that are being continued this year, emanated from the financial support received from these fundraising efforts. A strong first punch was landed when over $42,000 was raised at the 2018 Celebration of Flight. Next, we must land a second punch; a successful Mid-Year Fundraising Appeal beginning in July. Your past support has made a difference. We ask that you step up to help keep the momentum going. Watch your mailbox and follow our progress on Facebook and Instagram.