Volunteer In The Spotlight – Michael Alberich

Volunteer In The Spotlight – Michael Alberich 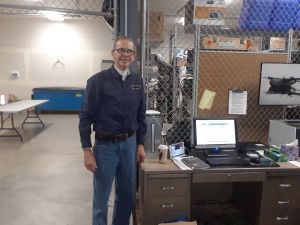 Michael Alberich (CWO4 USA Ret.) is our volunteer in the spotlight this quarter. Alberich made his home on Whidbey after retiring from a career with civil service and  twenty-one and a half years in the U.S. Army.  He works in the artifact assessions area and has been with the museum for little over a year.

“I have always enjoyed researching history,” he says. “I have somewhat of a background doing this as I worked for about a year in the research library at Army Aviation Museum at Fort Rucker, Alabama.”   He did this as part of his official duties while grounded temporarily as an army aviator due to health reasons. “A lot of people are interested in military aviation history,” he continued. “We would get visitors and questions from people from all over the world.”

In the Army, Alberich flew the Attack Helicopter (AH-1 Cobra) as well as the multi-engine C-12 Huron.