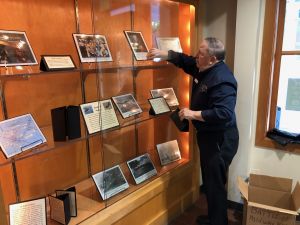 Museum volunteer Dave Strohmeyer puts final touches on the “Battle of Midway” remembrance display erected at the Freeland, WA library. John Hughes assisted in the endeavor. The battle occurred between June 4 – 7 1942 and gave the US Navy carrier aircraft a decisive advantage that turned the tide of WWII in the Pacific Theater. The display will be on exhibit at various libraries till the end of the year. (Photo by John Hughes)