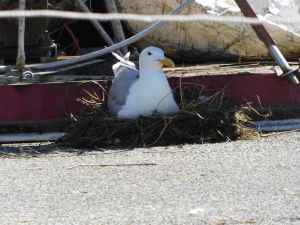 Papa Seagull “Felix” sits atop a nest with three eggs waiting for hatchlings in the Aircraft Display Area.  Seagulls are known to pair for life and are productive breeders with the mating season traditionally beginning in early February resulting in the breeding season starting from May to the end of July – on average a clutch of three eggs are laid in April to early May. The eggs take about three weeks to hatch so the first chicks are generally seen about the beginning of June.