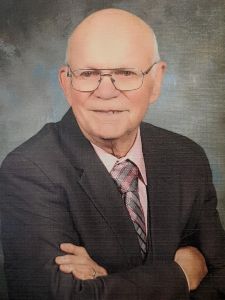 Edgar Ward O’Meara was born on May 21, 1929 in Chaffee, Missouri and died on his 92nd birthday.  He was the youngest of three children, living with his mother Ruth O’Meara and his stepdad Vincent O’Meara.  Ed joined the Navy at 17 starting his 20-year military career.

Ed met Phyllis at the USO in Seattle when he was stationed there.  They were married in 1952 and started their family there.  Debbie was born a year and a half later in Seattle.  Ed was transferred to Oak Harbor, WA and that was where Marian was born.  A transfer to Hawaii and the third daughter, Kathy was born.  After another stop in Washington state, they went across country to Florida where the last daughter Marita was born.  A couple of cross-country trips between Florida and San Diego, CA. Ed finished his 20-year career with the Navy.

Ed worked for Pratt & Whitney aerospace in Florida until they decided they wanted to move back to the Pacific Northwest.  Ed loved that part of the country.  Ed got a job with Boeing and finished out his career there.

After 60 years of marriage, Phyllis died of cancer.  Ed was reconnecting with old friends and found Louise Mueller in Coupeville, WA, they had known each other since 1954.  Ed and Louise were married in April of 2014 at the age of 85.  They spent their time dancing, traveling and just enjoying life on beautiful Whidbey Island.  They were married for 7 years.

We will miss our joking Eddie, we all love you.

Ed is survived by his wife Louise, his daughters Debbie Montgomery, Marian Roberts (and Larry), Kathy Nelson (and Dave) and Marita Christiansen (and Doug).  He also had 6 grandchildren and 4 great grandchildren.

Ed was preceded in death by his wife Phyllis, mom and stepdad, Ruth and Vincent O’Meara, sister Roberta Emr and grandson Sean Christiansen.

Services will be held in Portland, Oregon on July 17, 2021.  Dates to be firmed up and details to follow in the on-line obituary and a guest book can be signed under Hillcrest Funerals and Cremations, www.hillcrestfunerals.com