Officers and Board of Trustees A native of Los Angeles, CA., John enjoyed a career as a Boeing IT Specialist in software development and database administration for 35 years supporting both the Commercial Airplanes and Defense & Space, divisions. John became involved with the Pacific Northwest Naval Aviation Museum in 2012 due in part to his father’s WWII Naval aviation service in patrol squadron VP-63 and became further enthused with the storied and rich history of Naval aviation.

John sees his support of the museum as a very rewarding and interesting experience especially as seen in the light of the recent years of museum and foundation growth. John looks forward to the building of our new museum so that the public and future generations come to know Naval aviation history both locally and regionally. Bob was designated a naval aviator in 1985 and moved to Oak Harbor with his wife Terry to begin flight training in the EA-6B Prowler.  He completed operational deployments to the western Pacific Ocean and the Mediterranean accumulating over 300 carrier arrested landings. Following active duty, he continued his Naval Reserve service flying the DC-9 at NAS Whidbey Island and retired from the Navy with over 22 years of combined active and reserve service.

Bob and Terry have two grown children and have lived in Oak Harbor for over 36 years. His other outside interests include reading (especially books on military history), restoring his vintage Datsun 280Z sports car, shooting, coin collecting, and tackling all sorts of home improvement projects. “I am truly excited to continue to pursue my lifelong passion for military aviation through service to the Pacific Northwest Naval Air Museum!” 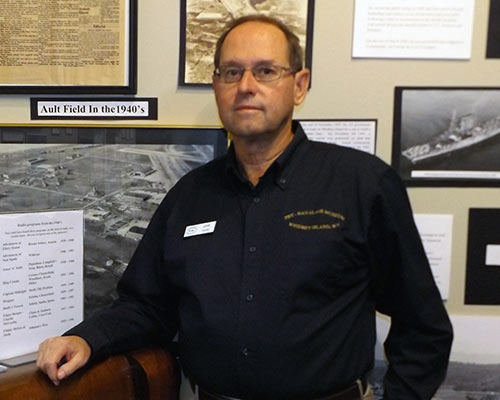 John is from Ironwood, Michigan and was commissioned through the NROTC program at the University of Idaho with a BS in Mathematics. He was designated a Naval Flight Officer and flew as a Bombardier/Navigator in the A-6 Intruder with VA-85 based at NAS Oceana, VA and flew off the USS Forrestal during two Mediterranean cruises. Later tours included one as an Instructor of Naval Science at UCLA where he obtained an MBA Degree in Finance and Investments and a follow-on tour as Hangar Deck Officer aboard the USS Ranger. He continued his Naval Reserve Service at NAS Whidbey Island flying as a P-3 Navigator and completed 26 years of active and reserve service. He was an Associate Professor at Embry-Riddle University and for Chapman University teaching finance, mathematics, and statistics as well as various aviation courses. He has owned two airplanes and was a commercial flight instructor. He has been a resident of Oak Harbor since 1976 and is a local business owner. Kevin Dresker is one of our two newest board members. He has been the Chief of Police for Oak Harbor since October of 2016. He was born in Kansas, lived in Illinois until he was 15 years old, then moved to Wenatchee WA.  Chief Dresker served three years as a Military Policeman and K9 handler in the U.S. Army, serving my last year in South Korea. He has been in Law Enforcement for 33 years and enjoys boating, crabbing, biking, motorcycle riding and many other outdoor activities. He also enjoys computer games, building models, and reading good books. “I’ve always been a student of history, especially military history,” he says.  “I’m a proud member of Navy League and have embraced all things Navy since being here in Oak Harbor (tough for an Army guy!).” 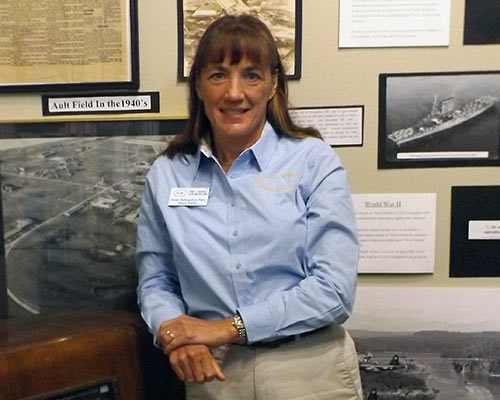 Captain Piper was born and raised in St. Paul, Minnesota. She received her degrees in Mechanical Engineering from MIT in 1984 and 1985. She served in the U.S. Navy for 30 years, retiring in July 2015. As an Engineering Duty Officer, she served at various ship repair facilities and on maintenance staffs. She also is an experienced Navy Diving and Salvage Officer. Selected as an astronaut by NASA, she is a veteran of two space flights: STS-115 in September, 2006 and STS-126 in November, 2008; logging almost 28 days in space. She has completed five space walks, totaling 33 hours and 42 minutes of Extra-Vehicular Activity (EVA) time. She and her husband, Glenn, currently reside in Oak Harbor, WA. 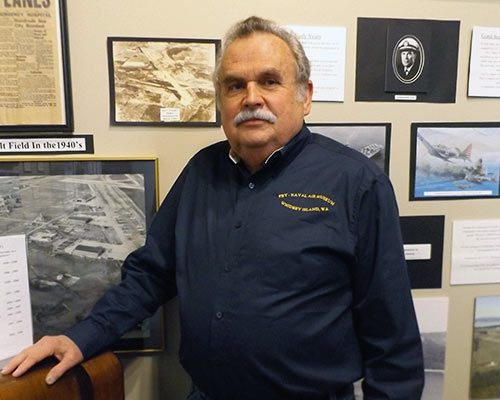 Wayne Crider attended the University of Arizona where he majored in Business and Public Administration. After 24 years of naval service he retired from the US Navy at NAS Whidbey Island where he and his wife Sheilah chose to make their permanent home. During his service he saw action during the evacuation of Vietnam and during the Grenada invasion and liberation from pro-communist Cuban forces occupying the island. He is currently the Executive Director of the Skagit/Island Counties Builders Association (SICBA) and has served in that position for the last 20 years. Bryan Bjorndal was elected to the Board of Trustees in January 2022. He is a scientist, marine biologist, an engineer, and entrepreneur. Last year, Bryan became a Lifetime Member, and active in opening up the PBY for docent guided internal tours. After moving to Whidbey Island last year, he started a photo tour company on the island and business consulting in Oak Harbor. He is a member of the Board of Directors for the Island Shakespeare Festival, and a member of the 2022 class of Leadership Whidbey.

“I am honored to be able to serve this fine organization and continue the work of stewardship begun by those before me.

With no military service, I am humbled to be included with this outstanding group of people, I appreciate the trust and the support I have received thus far. My objective is to promote the educational and entertainment experience to our visitors and the residents of Whidbey Island.” Judy Lewis is a new Board Member and a life-long resident of Washington state.  She was born and raised in the rural community of Springdale.  Her father was a veteran of World War II, serving in the Pacific war theater in the United States Marine Corps as a Tech Sergeant maintaining and repairing aircraft.  After graduating high school Judy wanted to follow in her father’s footsteps and join the Marines but her father forbade it so she got married.  She had a series of jobs in the next few years to include waitress, bartender, hardware store clerk, clerk-typist, fire lookout tower observer, and Department of Natural Resources night dispatcher.  This radio experience led to employment as a Stevens County sheriff’s radio dispatcher and jail matron and sometimes deputy sheriff when needed for undercover work in narcotics operations.

Judy moved to Spokane and, while working at the Boise Cascade Plywood plant, she was offered a test for Communications Officer with the Washington State Patrol.  She was hired in March of 1973 as the first female communications officer from the civil service list.

In 1979, she was commissioned as a trooper and assigned to work the freeways of King and later Snohomish county.  Throughout her career she trained in both advanced and technical accident investigation and, in the last 5 years of her career, she was a Breath Test Technician assigned to maintain the breath testing instruments in Skagit, Whatcom, San Juan counties, and Whidbey Island.  She also taught standardized field sobriety testing and taught law enforcement officers how to successfully apprehend and prepare reports on drivers who were under the influence of intoxicants and drugs.

Lewis was hired by the Washington State Liquor and Cannabis Enforcement Department in 2007 and served until 2017 when she decided to retire and get more involved in the community.  She moved to Whidbey Island in 2013 and has always been interested in history, particularly having to do with aircraft.  At one time she began to learn to fly but only was able to complete the ground school portion.

She has always been interested in the warbirds after having heard her father tell his stories about the ones he worked on during the war. One of her good friends, John Hughes, also a Museum volunteer, asked her if she would be interested in becoming a board member and she is happy to serve. 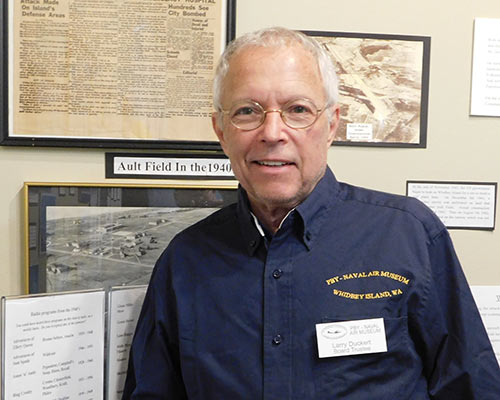 Larry Duckert M.D., Ph.D. was a surgeon in the Department of Otolaryngology – University of Washington School of Medicine ( Ear Nose and Throat – Head and Neck Surgery ) for 40 years until his retirement in July 2018. Outside of his professional career he has maintained a special interest in aviation history and has authored articles in aviation journals as well as accumulating a large collection of aviation artifacts over 50 years. He has coupled his microsurgical skills and aviation interests to build small and large scale aircraft models some of which are on public display. Other interests include vintage automobiles and bonsai cultivation which he shares with his son-in -law. He is blessed with a supportive family consisting of wife LaRayne, adult children and grandchildren who enrich his life in retirement.

Sign Up For Our Newsletter To Receive Quarterly Updates

We Can’t Wait to Keep You In the Loop on Fun Happenings and All Things Naval Aviation History.