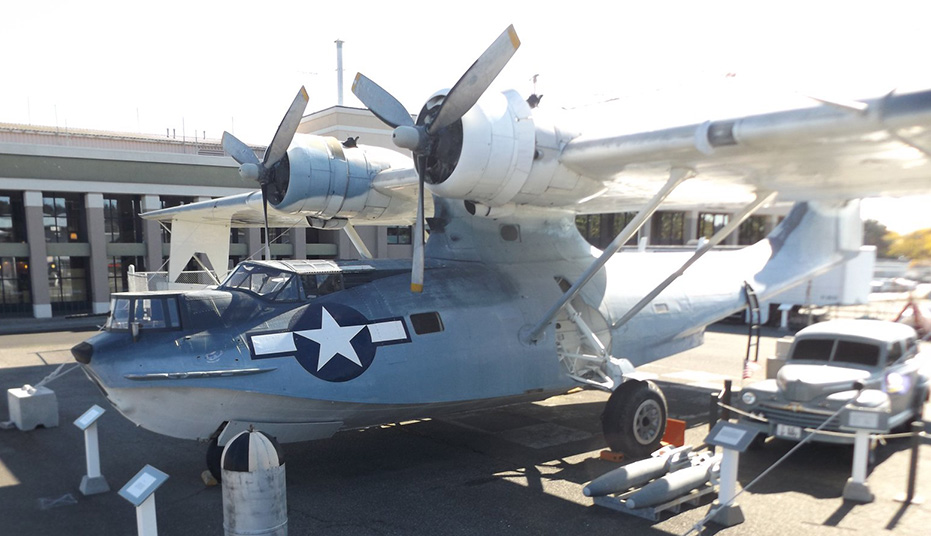 Our PBY Catalina 5A Aircraft On Display

Visit the Pacific Northwest Naval Air Museum (PNWNAM) for a tour of our vintage amphibious aircraft.

PBY stands for Patrol Bomber, the “Y” simply denotes the manufacturer which was Consolidated Aircraft Co. The PBY was an incredibly versatile airplane that could land on both water and land runways. They could drop torpedoes, depth charges, and bombs, while defending themselves with multiple high-caliber machine guns. These unique aircraft were used all over the world, especially along coastal areas, to patrol for enemy fleets and perform rescues. 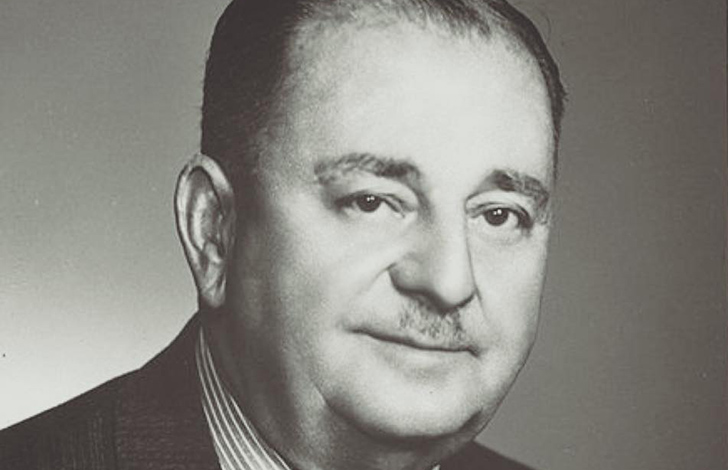 The Father of the PBY

Isaac M. Laddon lead the design of the PBY for Consolidated Aircraft.

In 1927, after an extensive career in preliminary engineering, Isaac M. Laddon joined Consolidated Aircraft and led the design of the prototype for the flying boat. On October 28, 1933, this prototype resulted in Consolidated receiving the contract from the U.S Navy for 60 PBY-1s, making it the largest aircraft order in the U.S. Consolidated made a total of 2,387 planes for the U.S Navy and 636 planes for other states and organizations. The first squadron received their PBY aircraft on October 5, 1936.

Plans to create the second naval installation on the Puget Sound began on January 18, 1941. The area selected was Crescent Harbor and Maylors Point in Oak harbor. Naval development also included the creation of Ault Field known today as NAS Whidbey Island. With the Japanese bombing of Pearl Harbor in December of 1941 the base was starting to expand rapidly with additional personnel, planes, and facilities. 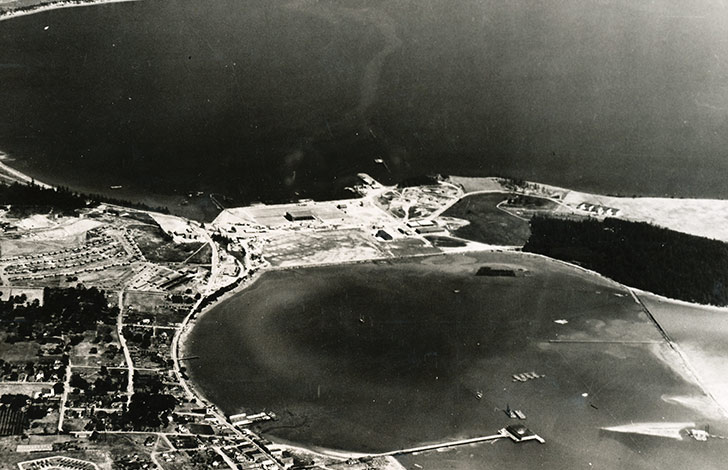 Seaplane Base Under Construction

Land was cleared, tons of rock were dumped, and immense amounts of concrete was poured. 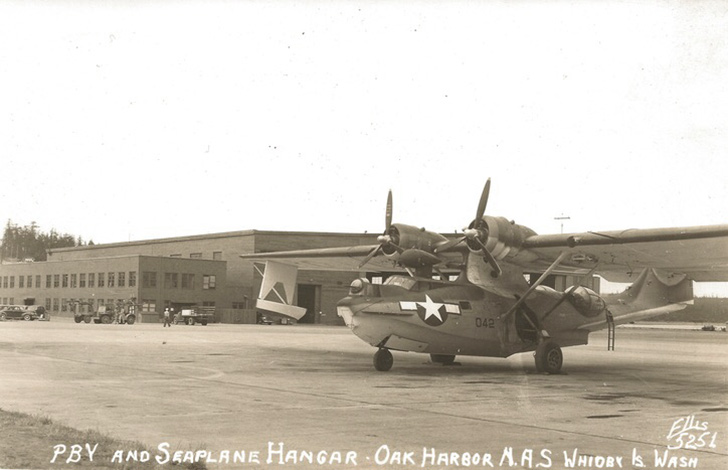 PBY on the Tarmac in Oak Harbor

The hanger behind the aircraft is now the Navy Exchange.

In December of 1942, the first PBY squadrons began flying out of Oak Harbor’s newly-built seaplane base. These patrol bomber squadrons played an important role in the Pacific, flying missions to Dutch Harbor, Cold Bay, Umnak, Nazan Bay, Adak, Amchitka, Shemya and Attu. The PBYs’ mission included a variety of responsibilities, including training, patrol, bombing, reconnaissance, and search and rescue.

During WWII, due to their age and capabilities, the PBYs played a largely defensive role with missions increasingly focused on search, rescue and transport. This PBY crew was the first to spot the approaching Japanese Fleet before the Battle of Midway. 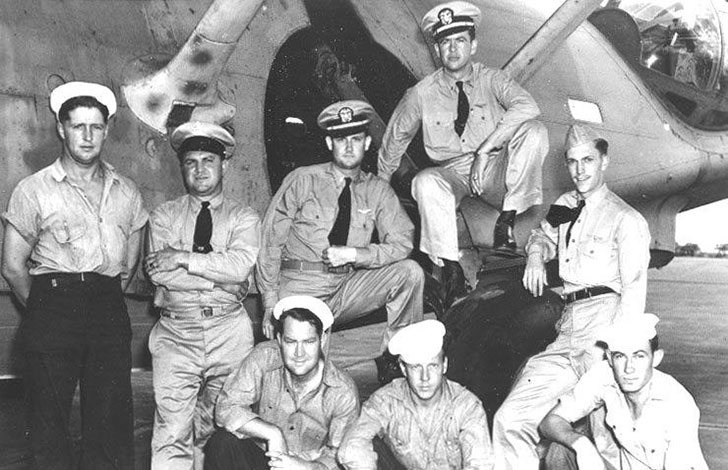 The Battle of Midway

This PBY crew discovered the Japanese fleet before the battle. 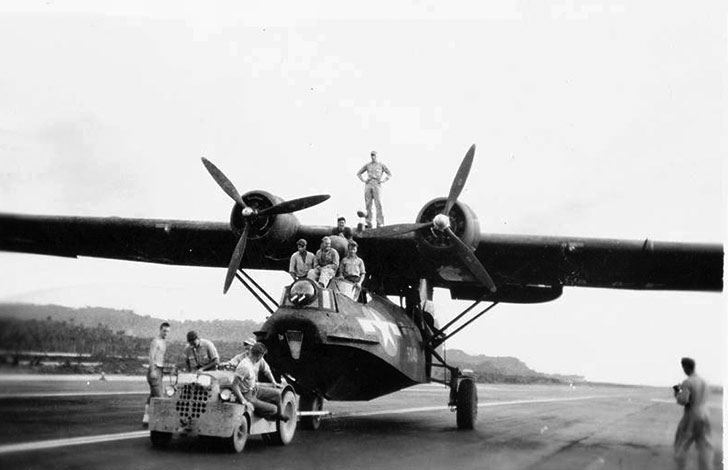 LTJF Lloyd G. Alvey atop the wing of his PBY-6A after emergency landing in the Solomon Islands during WWII.

By the end of 1943, PBYs began withdrawing and were replaced by Martin PBM Mariners. On June 1, 1949, the last squadron in the U.S. Navy reported the last Catalina in its inventory.

Our PBY-5A Catalina in 1965 shortly after being purchased from the Navy. Note the civilian registration number on the back of the hull looks temporarily chalked on and a new turret in the nose and well weathered paint radar dome are gone. All the external antennas were removed and it was demilitarized by stripping out the guns. 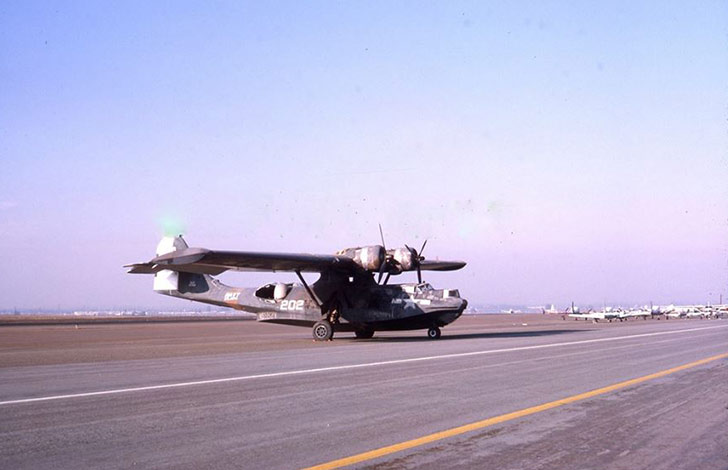 Our PBY Which We Have Nicknamed Gigi

This picture was taken shortly after the aircraft was sold as surplus by the Navy in 1965. 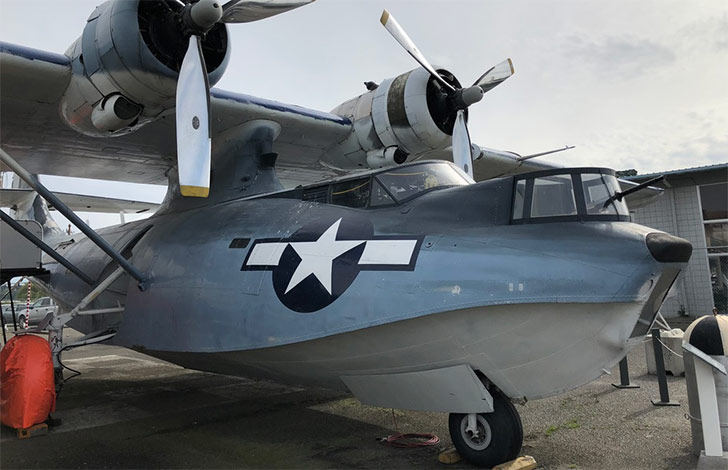 Volunteers are lovingly restoring our vintage aircraft, come see for yourself!

Our PBY-5A Catalina is on display in downtown Oak Harbor, WA and open for public tours with the purchase of museum admission. We are in the process of restoration to what she would have looked like when she served. Please see below for some of the items that are still on our restoration needs list.

This is a list of missing items and work that remains to finish on the restoration of our PBY Catalina. If you have and are willing to donate any of the missing items, or can help in any other way, please contact us.

Sign Up For Our Newsletter To Receive Quarterly Updates

We Can’t Wait to Keep You In the Loop on Fun Happenings and All Things Naval Aviation History.